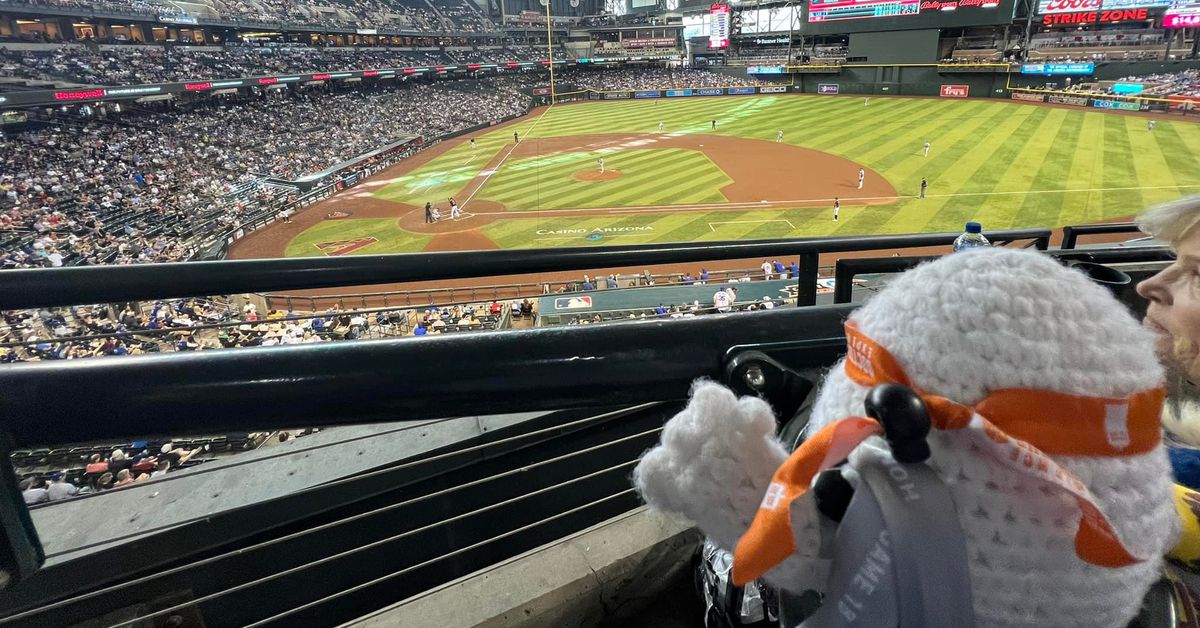 The following is not a Guide entry, as I am still going through my notes on how best to fully experience Chase Field in Phoenix. That said, Eric suggested that we could always use more content regarding my experience on the road. #JuniorCircuit.

[Dramatization may not have happened.]

I never thought I’d be one to embrace memes, but here we are. I suffer from a few forms of arthritis which I treat (successfully) with medication. Generally, I am able to function relatively normally without too much pain or discomfort. However, when my condition is terrible, I’m basically bedridden. So I called to cancel my trip to Philadelphia and Washington DC. I lost a few deposits and had to sell my tickets at a loss, but it was the right decision.

After last year’s debacle in Miami (where I dodged a tropical storm and juggled traveling to just one game), I realized that sometimes stealth is the best part of bravery. A few people have asked about my process for planning these trips and this information is worth sharing at a later date.

The weather cooperated with this trip, as it was warm but not unbearable. Luckily, I was treated to two entertaining games in parts of the ballpark that I hadn’t visited before this trip.

Therefore, moving the start time of this game from 6 p.m. to 4 p.m. really messed up my plans. I originally planned to take the tour of Chase Field because I have a standing rule that if I get the chance to take the tour of a venue, I will. As the game has been moved for a national audience, the latest start time for any tour here has been moved to the literal time of my flight to San Francisco.

As a result, I had just enough time to get to my hotel, get changed, and take a hotel shuttle to the ballpark. I then had to get to my seat with less force as my legs bothered me to the point of being uncomfortable.

What struck me the most during this match, apart from the live-tweet, was the continuous maturation of Tony “I am not a cat” Gonsolin.

Last year’s Gonsolin continued to snack in the strike zone and continued to walk people around to the point of being ineffective. Like I said before, Tony Gonsolin is probably my favorite Dodger, and if the current comment system wasn’t terrible, I’d link to this story. As such, it was interesting to see the turnaround from last year’s performance.

Either way, it was a good entertaining game that could have gone either way.

I don’t normally arrive late at the ballpark, but as previously discussed, I wasn’t 100%. I finally got to my seat at the end of the first run, and the game accommodated me because nothing really happened. Sitting near the Dodgers’ bullpen at Chase Field wasn’t as interesting an experience as sitting next to them in St. Louis or San Francisco because they were literally ten feet away. you at any time. But sometimes fate gives you the opportunity to see something good:

I could complete the official recap, but there are two things I would like to share about this game from my perspective. There was a moment in the final innings when Mookie Betts threw a ball into the right field bleachers where the ball ricocheted off the seats directly in front of the wall, which looks like a fun place to sit. At a time when the Diamondbacks were appealing a decision on the field, Mookie Betts took a moment to joke with people who ended up with the ball he threw. I thought it was a really good time.

While the Dodgers won, thanks to a few timely strikes and Craig Kimbrel not falling from the tightrope (Again), this game was also quite entertaining, although difficult to watch due to my distance. However, it’s not like I haven’t had a decent view of certain actions.

The main point to remember is who I doesn’t see: Justin Matthew Turner. Like I said before, I saw Justin Turner in all 31 games I played last season. I did some checking and went back to September 2018, every Dodger game I went to, 37 total Justin Turner played (last game I went to in San Francisco – Game 161, both games in 2019 (San Francisco – including “Go get it out of the bay”), and all three games so far, before this one.

Alright, I think this article served its purpose as a palate cleanser, so I’ll cut it short here. The next report will be in less than a week when I let you in on (check the weather report) cloudy, rainy Chicago at Guaranteed Rate Field and Wrigley Field (always worth visiting the far reaches if only for a visit if we are in town).

Great. I will bring diapers. See you later.